Thrillers? I almost never read them. Not even medical thrillers (though I love reading nonfiction books on science and medicine). This one, however, leaped out at me as I scrolled the daily twitter feed: 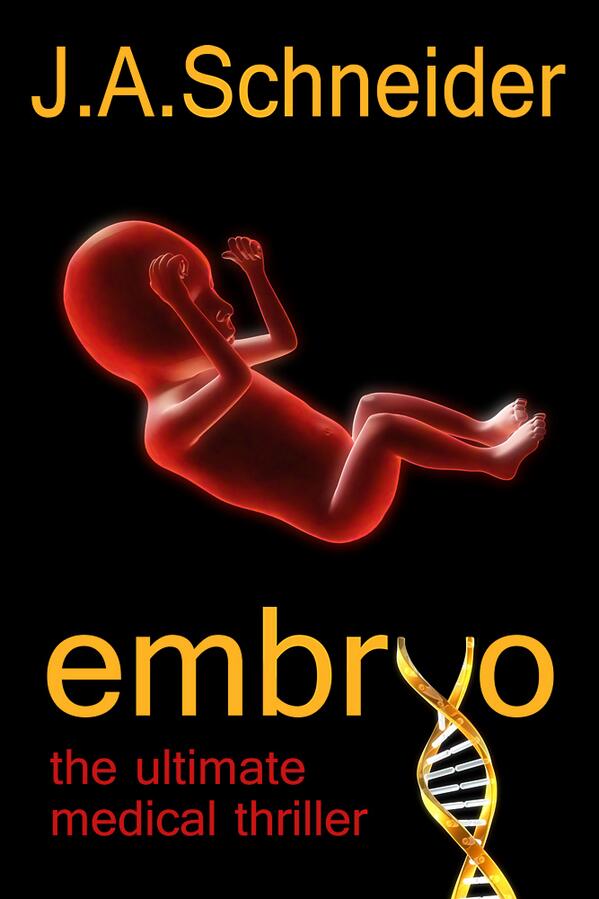 That is one striking, dramatic photo, and the DNA strand for the letter Y is very attention getting as well.

Will I read the book? Maybe. I’m so backlogged on books. I’ve read Robin Cook’s medical thrillers, and just wasn’t impressed. I don’t care to read about serial killers unless they’re exceptionally well done, like Hannibal Lector, and even then, I never finished that novel. But if I do read a thriller this year, EMBRYO might be the one. Only because of the cover; not because I can bear to read whodunnits.

Publication Date: May 7, 2012
Synopsis (from amazon):
“Maria Moran’s first inkling of trouble was the coppery taste in her mouth. It came suddenly, a rushing whoosh of something that made her gag, and when she reached to wipe her mouth, her hand came away smeared with blood.”

So begins this thriller about a young intern, Jill Raney, determined to investigate tragedies and terror at a famous fertility and genetic engineering hospital. When two pregnant women die and a fetus is delivered with severe chromosomal abnormalities, Jill’s superiors – including handsome, smitten-with-her resident David Levine – insist there’s no common link.

But her suspicions deepen with the grotesque murder near the hospital of another pregnant woman – her belly drained of amniotic fluid. And when a woman miscarries in the hospital and then disappears, Jill frantically searches for her – following a terrifying path that seems to link all the victims: Is someone playing with life…and the structures of human life itself?

An unforgettable tale of suspense with a shocking denouement, Embryo takes you deep into the mind of malignant genius.

It’s rare these days that I find a novel I can’t wait to get back to, but EMBRYO was just such a novel.

…. Though I thought one aspect of the ending was a little too sci-fi for the integrity of the rest of the story

…A very strong four stars from this reviewer.

J.A. Schneider is a former staffer for Newsweek Magazine. EMBRYO is her first book in a projected series. Its sequels are EMBRYO 2: CROSSHAIRS, and EMBRYO 3: RANEY & LEVINE. She’s been married for decades to a physician who enjoys explaining medical concepts which she interweaves as she writes. They live in Connecticut with their family. What created the idea for Embryo?

The idea came like a lightening bolt when hearing a conversation between J.A.’s husband (who did OB before switching to Cardiology), and an Ob/Gyn friend who was excited about IVF and its advances in curing diseases in utero. As an author who had already published fiction and non-fiction, J.A. thought about all human discoveries – from fire to atomic energy – and the fact that they can be either good or very bad if they fall into the wrong hands. It was a thought that wouldn’t let go. — J.A. Schneider