#Peekers are clamming tools, and The Pied Piper Was…A PEDOPHILE?

“Bungelosen Strasse!” reminds me of Captain Haddock’s favorite epithet, “Blistering Barnacles.” I’m onto something here. A vaguely fishy, watery pull is strong in the blood that flows through my veins–a tenuous connection to the shores of the Baltic Sea, a vague ancestral memory of the lap of seawater against the side of my boat, the fishy whiff of a coastal village. Epigenetics and chimeras may affirm what I’m talking about here. Actually, I meant to talk about this business of the Pied Piper being a medieval pedophile. Not that I believe it, but I’ll quote a staff writer from The Straight Dope who goes by the alias Eutychus. There’s more, lots more, at this website. 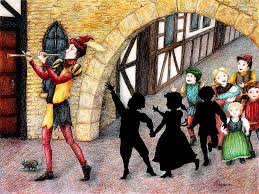 In “A World Lit Only by Fire” (1992), William Manchester mentions the Pied Piper of Hamelin as a psychopath and pederast involved in some sort of mass child killing. After reading further about this, I noted a connection to Pomerania and the Baltic Sea. Some of my ancestors migrated to Wiscsonsin from there, and fiercely denied being “Pollack.” Therefore it is imperative that I not work on my novel or book reviews for Perihelion until I have chased down more information about this tenuous connection to the world’s most famous pedophile (a false charge, I’m sure) and the homeland of my forefathers.

My mom’s parents grew up on the Cedar River, and many Demro descendants from Ault Dammerau who lived along that horse-shoe turn in the river went “clamming” (fishing for clams) before plastic was invented.  Clam shells supplied the world’s biggest button factories along the Mississippi.

Clams were thrown into big pots of boiling water to kill them. Men and women pried the loosened shells apart and cleaned out the whitish meat. Clamming for button manufacturing was big business in the late 1800’s along the Mississippi River.

Clammers peered through hollow tubes called”peekers” or “peepers,” and a museum in Shell Rock, Iowa, near Heery’s Woods, has one on display.

According to East Dubuque Local Area History Project,  the clammers used flat bottom boats that had a rack on each side. “A bar was hung on the rack. Each bar had hundreds of lines with hooked tips. They would hang one bar off the boat and drag it along the bottom. The clams would snap shut on the hooks. Then the fisherman would haul the bar into the boat and hang it up on the rack while he dropped the other bar into the river. The clam hunters pulled the clams off the hooks. If they were too small, they were thrown back into the water. The clams that were kept were thrown into the boat and taken to shore. ”

On the river bank, clams were boiled in huge kettles of water until the shells popped open. In cleaning out the meat, clammers sometimes found fresh-water pearls. Some made pearl earrings out of them, and some were allegedly sold to the queen of Spain.

Nothing was wasted. Meat from the clams went into dog, cat or hog food. The shells were shipped to button factories along the Mississippi. Workers drilled (or punched?) disk shapes from the shells, then drilled holes into the disks to make button holes. Leftover shells were ground-up and sent to Japan, where they were ground up and used to start pearls in oysters. Some of the left-over shells were thrown out and there were after piles of shells with holes along the shores. To this day along the upper Mississippi, you can find clam shells with holes in them where there used to be a button factory. There were eleven in Muscatine, where a museum displays artifacts and photos.  Burlington and Dubuque also had button factories.

Although clamming is now under Federal control, people still go clamming on the upper Mississippi. If you want to go clamming you have to have a license by the Federal Government. If you don’t have a license and you get caught you will get fined.

Back to the “peeker” (I can’t find a google image!) and the Pied Piper. From page 66 of Manchester’s book:

“The Pied Piper of Hamelin . . . was a real man, but there was nothing enchanting about him. Quite the opposite; he was horrible, a psychopath and pederast who, on June 24, 1484, spirited away 130 children in the Saxon village of Hammel and used them in unspeakable ways. Accounts of the aftermath vary. According to some, the victims were never seen again; others told of disembodied little bodies found scattered in the forest underbrush or festooning the branches of trees.”

Manchester doesn’t footnote this passage and although he does give a long bibliography at the end of the book, the reader can’t readily determine where he got it. The official website of the German town of Hamelin makes no mention of it, which is no surprise, since they still make a ton of hay on the legend and have an official town “Pied Piper” to this day. Our own research suggests that Manchester got some of the details wrong–among other things, he appears to be off about 200 years on the date. But he didn’t just make the whole thing up.

…Hamelin historian Martin Humberg states that around 1300 a stained glass window was added to the central market church in Hamelin showing “an old figure of a man in colored clothes and surrounded by a crowd of children.” The inscription around this window has been reconstructed and reads:

In the year of 1284, on John’s and Paul’s day
was the 26th of June.
By a piper, dressed in all kind of colors,
130 children born in Hamelin were seduced
and lost at the calvarie near the koppen.

Scholars disagree on the meaning of “the calvarie near the koppen” but most agree that it refers to a place of execution near an as yet undetermined hill.

There are many other references to the story in Hamelin itself, including a street named “Bungelosen Strasse,” literally “the street without the sound of drums,” allegedly so named because dancing was forbidden in that street in memory of what had happened to the children.

Taken at face value, the inscription suggests that Manchester was right–130 kids came to a bad end at the hands of a deviant. But there is no corroborating record of any mass execution of children in the vicinity of Hamelin, which would seem to be an important event if it really happened. The window with the inscription was replaced in 1660 and is now lost, so we’re relying strictly on secondary evidence and not much of that. From what I can determine.

there’s no factual basis for Manchester’s lurid tale of “disembodied little bodies [presumably he means ‘dismembered’] found scattered in the forest underbrush or festooning the branches of trees.”

(emphasis mine; let’s hope no such thing really happened!)

The earliest versions of the tale make no mention of the piper’s skill as a rat catcher–that part of the story doesn’t show up in literature until about 1550. It appears that the final tale was a mixture of the true story of whatever happened to the children in Hamelin plus various European rat catcher legends. Stories of an itinerant rat catcher similar to the one in Hamelin show up in Austria, France, Poland, Denmark, England, and Ireland…

…..there is still too much speculation and not enough evidence to say what actually happened to the children of Hamelin in 1284.

One currently popular interpretation comes from Jurgen Udolph and focuses on the variant that the children emerged from the cave either in Transylvania or somewhere in eastern Europe. Udolph believes that the phrase “children of Hamelin” should be interpreted figuratively and not literally. He thinks the tale may refer to an eastward migration of people from Hamelin into the area between Berlin and the Baltic. The theory has root in German historian Wolfgang Wann’s conjecture that Bruno von Schaumburg, who was then Bishop of Olmutz, recruited some residents of Hamelin to settle in Moravia.

….on the theory that people who relocate to a new land tend to name their new homes after the places they came from….it should be possible to trace new settlements by establishing the origins of their names. In an article in Time International, Ursula Sautter reports:

“After the defeat of the Danes at the Battle of Bornhoved in 1227,” explains Udolph, “the region south of the Baltic Sea, which was then inhabited by Slavs, became available for colonization by the Germans.” The bishops and dukes of Pomerania, Brandenburg, Uckermark and Prignitz sent out glib “locators,” medieval recruitment officers, offering rich rewards to those who were willing to move to the new lands. Thousands of young adults from Lower Saxony and Westphalia headed east. And as evidence, about a dozen Westphalian place names show up in this area. Indeed there are five villages called Hindenburg running in a straight line from Westphalia to Pomerania, as well as three eastern Spiegelbergs and a trail of etymology from Beverungen south of Hamelin to Beveringen northwest of Berlin to Beweringen in modern Poland.

I like Udolph’s explanation. Like most legends, the Pied Piper story most likely has its origin in something more prosaic than fantastic. But the fantastic does make a much better fairy tale.

END OF EXCERPT written by Eutychus. Time now for Carol to get to work on her novel. BUT WAIT! –My mom and sister still have some vintage clam buttons and a fresh water pearl or two. Now to see if I can get my hands on some, maybe via ebay… oh, and shouldn’t I buy a copy of that 1960s book, The Button Boat, in memory of my ancestors?