Discounted for a limited time / Awarded the Awesome Indies Seal of Approval!

Dystopia, apocalypse, hubris: just when I think I’ve seen it all, someone comes up with a fresh twist on familiar themes and archetypes. Botanicaust is thought provoking and intriguing; full of conflict, tension, sex appeal and longing. Humans genetically engineered for photosynthesis? It sounds ridiculous–cold-blooded reptiles, MAYBE, I could believe. But who cares if it will ever happen in real life? It happens here, and it’s awesome.

I love this novel. It’s one that makes you think. Escapism? Find a predictable romance. This one is too rich, too deep, and so thought provoking, it’ll be in my head for days or years to come.

The cover and the synopsis, along with the author bio, had me so excited, I bumped this novel to the top of my queue, even though a dozen other authors have asked me to read and review their novels (but this author and I had never even heard of each other). From her amazon author page I saw (with exquisite envy) that Tam Linsey has toured the superconducting supercollider. That alone would get me to read anything she writes. The woman obviously knows how to have a good time. But it gets even better: she hunts moose and manages to garden in Alaska (I have trouble enough growing things in Iowa, and I was raised on a farm with masterful gardening mother and a dad who could raise bumper crops in years of flood or drought).

Oh, it gets even better: Tam Linsey not only writes speculative fiction but gluten-free cookbooks too. Like me, she has no choice in the matter; swapping spoons at a potluck is enough to set off a gluten reaction.

Reading the author bio first, my expectations were so high, I was afraid I’d drop the book cold after one chapter and wish it were as good as it sounded. I’m happy to report the book is as good as I expected!

And now I’m frustrated. I can’t see a way to discuss the themes of “Botanicaust” without plot spoilers. So many issues, scientific and ethical. So many characters and conflicts, all handled well, but in a novel filled with page-turning suspense, I can’t say much. The “Fossilite” doctor with the red, bloodshot eyes could give me nightmares. Eww, halt the experiments, guys. The journey to his mountain hideaway has an epic feel, like reaching the Wizard of Oz. Truly nightmarish, vivid, memorable details.I want to talk about a certain pair of siblings who get separated. I’m totally counting on Tam Linsey to bring them back together in a sequel. Are you listening, Tam? You can make it happen. I just saw “Frozen,” and those sisters tugged at my heartstrings in a Disney way, but they don’t even begin to compare with the girls in Botanicaust. Family members in real life and in this novel (father and son, e.g.; sister and brother; children and parents) are all too often separated by great distances–geographical, cultural, medical, spiritual. The girls in this novel are especially engaging and wonderful. And they’re minor characters. Levi and Tula are, of course, even more riveting and compelling.The religious beliefs are handled so skillfully. The people are real. Just, way too real, maddeningly real. In real life, we know them.Tula’s dilemma at the end, choosing between her new life and Levi’s patriarchal lifestyle, is a theme that will never go out of date.I love this novel. It’s one of those that make you think. Escapism? Find a predictable romance. This one is too rich, too deep, and so thought provoking, it’ll be in my head for days or years to come.Let me emphasize: Nobody recommended this novel to me, nor did the author ask me for a review, nor had I even heard of her until this indie novel showed up “free” via the Amazon Daily Deal newsletter. My favorite novels of the past year all came to me that way: John L Monk’s “Kick,”, A.R. Taylor’s “Sex, Rain and Cold Fusion” and Gina DeMarco’s “The Neanderthal’s Aunt.” Those three have more of the quirky humor (even snark) that I love in a novel, but Botanicaust has the coolest, creepiest science I’ve seen in forever.

I was commenting as I read the book (Kindle highlights and notes changed my world). My MOTHER’S DAY update:

Halfway into the novel now, I’m annoyed every time I have to set it down and tend to laundry, dishes, even festive family affairs. The chemistry between Levi and the green woman is…wow. The cannibals fascinate me. The novel may have a few rough spots, typos, whatever, but when the story is riveting, who cares?

The cover art has changed three times (I’m updating this post seven years later; it is now 2021, and I’m wondering what has become of Tam Linsey). Here’s the latest version: 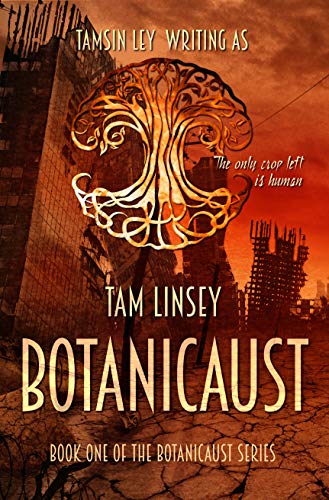 Tamsen Ley, writing as Tam Linsey – hmm, maybe that’s why I have been unable to find her online.

Tam Linsey, certified Master Gardener, avid cook, wife and mom, reads scientific studies for fun. In spite of the rigors of the High North, she grows, hunts, or fishes for much of her family’s food. During the long Alaskan winters she writes speculative fiction and gluten free cookbooks.

Born and raised in Alaska, I use the long dark winters to nurture my love for reading and learning. Science has always been especially interesting to me. Senior year of high school, I took AP Chemistry and AP Biology, won a scholarship to a DOE camp at Lawrence Berkeley Laboratory, toured the superconducting supercollider, and karyotyped DNA from the HIV virus. Then I realized if I pursued biomedical engineering like I planned, I might never see the outside of a lab again. So I attended Willamette University and earned a Bachelor of Science in English. (I still think that’s funny.) I began writing my first novel as my senior thesis. Maybe someday I’ll rewrite that ugly thing and publish it. After college graduation, I convinced my husband to move back to Alaska, had two children, bought a house, became a Certified Master Gardener, and began the challenge of gardening and farming in the High North. Thus began my obsession with self-sufficiency. Newly attuned to the land and our food supply, my mind created futuristic scenarios of a world without plants. A world without food. A world where bio-engineering might be the only thing that could save humanity. I drew on my previous grounding in science, plus the things I’d learned about plants and animals while farming to create the Botanicaust world. When I’m not writing, you can find me either outside, weeding the garden, fishing the river for salmon, stalking the woods for moose, or inside canning or cooking while listening to my favorite audio books. I currently live in Chugiak, Alaska with my husband, two children, and our house bunny, Abigail.

The only crop left … is human.

After genetically altered weeds devastate Earth’s croplands, Dr. Tula Macoby believes photosynthetic skin can save the human race. Her people single-mindedly embark on a mission to convert the cannibals roaming what’s left of Earth. But when Levi, a peaceful stranger, refuses alteration, Tula doesn’t think the only options should be conversion or death.

Levi Kraybill, a devout member of the Old Order, left his Holdout farmland to seek a cure for his terminally ill son. Genetic manipulation is a sin, but Levi will do almost anything for the life of his child. When he’s captured, he’s sure he’s damned, and his only escape will be death.

Tula’s superiors schedule Levi’s euthanization, and she risks everything to set the innocent man free. Now she and Levi are outlaws with her people, and she’s an abomination with his. Can they find sanctuary in a cannibal wasteland?