Dave Hoing isn’t just an author. He’s more than a writer whose tightly crafted prose has me sighing with admiration. Dave is the only author I read who’s known me in person since 1985–before braces, before Carol got married and had three children. Who else goes back that far, as a fellow author and beta reader? Nobody! Even as friends go, I can’t think of anyone else I’m still in contact with now who’s known me that many years.

It’s going to take me a while to collect favorite passages that illustrate his prose style and sheer competence in English usage. Lest you think that’s a tepid compliment, consider my tirades on the loss of simple language skills among people under age fifty. Knowing where to put a comma (not as often as you’d think), semi-colon (almost never), colon or exclamation point (six per lifetime, not six per novel!), is a dying skill that teachers no longer teach.

I’ll need Dave’s permission to quote from his short stories, novels, novellas and work in progress. In 1985, I was smitten with his musical, “VENICE,” though I’ve never seen it staged. He could post links to the music (hi Dave!). Of his novels, my favorite (if forced to pick just one) might be “Hammon Falls,” co-authored with his lifelong friend Roger Hileman. The characters are a literary memorial to Hileman’s own Iowa ancestors.

When George Hammon’s teenaged wife dies in childbirth in 1914, he flees small-town Iowa for Europe and the horrors of the Great War. Surviving battles, homelessness, and disease, he squanders his days on women and wine, trying to forget his lost love. But life is not idle in Iowa during his absence, and when a bitter and weary George comes home twenty-two years later, he finds a web of murder, suicide, and shocking revelations. The future of his family rests on one terrible choice…but is he prepared to make it? Spanning the years 1893 through 2009, “Hammon Falls” weaves a tapestry of estrangement, loss, love, sacrifice, and redemption. 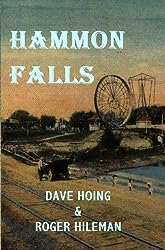 Hoing and Hileman lead the reader with consummate skill through a complex tale of young lovers, manipulative parents, and human failings which have repercussions that outlast generations. “Hammon Falls” is brilliant, a waltz through time, changing partners. With carefully crafted prose, the authors seamlessly transport us from character to character, across an ocean and twelve decades, into the present, when a new generation may at last rise above the sins of the fathers. This haunting, lyrical story will stay with you long after you turn the last page. ~Carol Kean (quoted on the back cover)

My Review at goodreads and amazon:

Iowans, don’t miss this story. “Hammon Falls” might be a fictional town, but those who live in the real- life counterpart will laugh in recognition, seeing “our town” in print.

Anyone who ever loved their parents and grandparents, especially the ones they never to to meet, this story is for you.
Review More than a novel. Beautifully written, painfully true.

Every family has a story to tell, but few ever tell it. We look with fascination at the remains of a life in an old scrapbook. Who is that pretty brunette with bobbed hair, dressed in white, staring back at us from a sepia print?

Roger Hileman stared back. And wondered. With nothing more than a few newspaper clippings, some grainy photos, and a letter, he wrote a screenplay and showed it to his lifelong buddy Dave Hoing. Together Hoing and Hileman transformed an obscure 20th-century girl’s short life into a novel that is compelling and unforgettable.

Most of the novel is fiction, and the real-life story doesn’t take long to summarize. Cora Felton “had to” marry Lester Hileman; their infant son was born infected, disfigured and not breathing; Lester left the boy in his mother’s care; the child grew up, married, raised four sons of his own and lived a normal life, like anyone. Unlike everyone else, though, Lester’s story piqued the interest of two men who know how to write.

The main plot of Hammon Falls unfolds during WWI with a young man, his socially prominent, controlling mother, and a seedy boxer whose only child loses her innocence to the young man and ultimately dies in childbirth. The novel ends in the 21st century with an old man trying to grasp how the sins of our fathers¬–and mothers—determine our lives, down the generations.

Dave Hoing’s famously beautiful prose captures the timeless poignancy and elegance of a forever-young grandma. I love the Gaelic phrase he composed for the dedication page:

His writing is so poetic and beautiful, I have to stop and re-read at times to luxuriate in his words.

The novel opens with an old man gazing into his father’s eyes in the haunting way we peer at old photos of ancestors we never met:

Yellowed and tattered behind the glass, the picture had hung in the bedroom of every house he had ever owned. In it a teenaged boy … stood alone on a vast scarred plain, layers of clouds stopped mid-swirl by the camera’s lens. The boy’s (uniform) rippled in long-silent wind…His face was slightly out of focus, as if a sudden small movement blurred the image. Only one eye, the right one, was clearly defined. Even squinting against the wind, it captured light in a way that made the whole photograph revolve around it, a whirlpool of gray spiraling into, or out of, a single bright point. In that eye Will saw the sum of the teeenager’s life. Although there was much more to come, his tale was already one of surprise, and sadness, and fear.

Handwritten on the bottom of the picture were the words, ‘Ypres, 1915,’ the year Will turned one.

For the thousandth time, the ten-thousandth, the millionth, Will studied the solder in the photograph. It was his father George at nineteen.

From here, we are swept to blood-soaked Ypres, to post-pandemic Paris, to newly liberated Ireland, and back to Iowa. We meet mobsters, socialites, and soldiers, a wise black stable hand, a spiritual Irish lady, and a heartbroken alcoholic. We see one family’s heirloom cross time and distance to become another family’s treasure. We see a doomed romance that is agonizing and searingly real.

Hammon Falls is well crafted, depicting multiple points of view, settings and time periods, and enriched by imagery that defines each character’s story arc: Life and death, light and dark, water and wind.

Although we know from page one how some of the novel’s storylines must end, we are compelled to watch as the characters play out their parts, inexorably. However, the authors are sly enough to hold back a few surprises for us, and those ultimately turn tragedy to triumph.

Finally, Hammon Falls offers a bonus most novels don’t: photographs. We get to see the portrait of the haunting girl in white who inspired this novel. We see her young husband Lester, fictionalized as George Hammon. We see snapshots of Lester and his son as old men, but Cora is frozen in time at seventeen. It sounds like a riddle: what kind of grandma never grows wrinkled and gray? The answer evokes tears, not laughter.

Hammon Falls is an American epic of a fallen family and a post-WWI nation, of innocence lost, responsibilities shirked, and a timeless search for who we are, what our grandparents before us were like, and how the choices they made determined who we are.

From his amazon his author bio:

Dave Hoing is a member of SFWA (Science Fiction and Fantasy Writers of America) with dozens of short speculative fiction publications, but he has published numerous literary and historical stories as well.

In real life Dave is a Library Associate at the University of Northern Iowa, where he has worked in one capacity or another since 1978. When he’s not at the library or writing fiction, he travels, composes music, collects antiquarian books, enjoys old silent movies, and wins money in the Iowa lottery often enough to keep life interesting.