The Girl on the Mountain by Carol Ervin – #WomensHistoryMonth – You’ve come a long way, baby 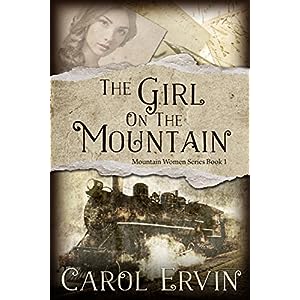 The Girl on the Mountain ranks in the Kindle Amazon Top 20 with an average 4.6 Amazon stars.  Price goes from 99 cents to $3.99 when Kindle Countdown Deal ends.

March is Women’s History Month, a good time to read well-researched, well-written historical fiction like Carol Ervin’s “The Girl on the Mountain.” If you ever feel nostalgic for the good old days, if you long for “simpler” times, the kind Ervin evokes with “sounds of leaf whisper and high cricket drone” and hawks making lazy circles in the sky, and if you think this “was the clean time, when the earth did not tremble with far-off crash of trees, and passing trains did not smother the air,” read on.

Maybe you’d love to do laundry the old way. May Rose, a twenty-year old bride living in a cabin in West Virginia logging country, “rubbed soap into his underclothes and set them to boil on the stove. He dozed, tipped back in his chair with legs stretched under the table, one hand on his jar, his mouth open. With her laundry stick she lifted the scalding cloth into rinse water, humming softly, as she did most days, to keep herself going. On the porch, she wrapped the legs of his pants around a roof post, stood back, and twisted each piece till no more water dripped out. Then she hung them on a line near the stove.” My mom to this day uses a wringer washing machine and I still line-dry my laundry. Boiling it and stirring it with a big pole, twisting and wringing jeans by hand, is not the simpler lifestyle I’d ever long for. Page after page of this novel reminded me of the Virginia Slims cigarette ads of my childhood. One in particular, in 1978, shows a vintage photo of a woman hanging laundry out to dry, with the caption, “Back then, every man gave his wife at least one day a week out of the house. You’ve come a long way, baby.”

Romance fans, this novel is not your cup of tea. The most respectable of the men do not hold women in high esteem. I’d hardly even believe it possible had I not grown up in a rural community where guys would invent rumors about nice girls, perhaps just because they wished the rumors to be true, and who knows, maybe the girl with the ruined reputation (no matter how undeserved) would just despair and become the harlot they wanted her to be.

The most-quoted line of the novel sums it up all too well: people hold on to ignorance like a family heirloom. It isn’t just logging hicks, small-town Southerners or rural folk. Even educated people cling to traditional beliefs. Don’t even get me started on world history. The first Buddhist emperor, Ashoka, had the right idea. More than two thousand years ago, civilized, rational, humane, enlightened societies existed. Then came conquering armies, zealots and new beliefs to impose on every man, woman and child, and throughout human history, women just keep getting the short end of the stick.

May Rose is young and in love with handsome Jamie, willing to leave the only family she’s known and follow him into the wilderness, obedient and eager to please, but he’s so difficult to please. It’s heartbreaking to see their interaction. He’s controlling; he keeps her isolated; “his ideas crowded out her own, like weeds taking over the garden. He’d chosen this place, and she’d tried to love it. In nearly two years, he’d taken her to town four times. He wanted her to go nowhere alone, but he no longer seemed to worry that she lived alone here.” Still, May Rose makes every effort to be cheerful and grateful for her lot in life. “She felt his lips on her neck and the length of him against her those Saturday nights, when he took her breath–those Sundays, when they knew what mattered.”

Did I mention how well written this novel is?

When he goes missing, May Rose ventures into the town alone. No one is welcoming. The men, even the respectable businessmen, accost her with demeaning attentions and attempts to coerce her into satisfying their “needs.” I wish I didn’t identify so much with May Rose, all these years later. “She never could think of a response, polite or otherwise, to something inappropriate,” and I know why: like too many women the world over, she was brought up to be polite and to please others.

Another girl on the mountain enters the story, the wild child, Wanda, who raises herself, more or less. “Maybe the girl trusted herself because she’d not been hampered by discipline,” May Rose thinks, while May Rose “had been corrected so often she never felt certain of anything.” Being so undisciplined puts Wanda  at great risk, but it also gives her an edge, a cynicism and a fighting spirit, a gritty realism that May Rose would do well to emulate. When May Rose speaks to her of being safe, Wanda laughs. “A feller can’t never wait for that. Every critter’s got something waiting to get it. Big things eat the little ones, even big trees choke out the shoots. And guess what? Them trees ain’t safe neither–wood hicks cut ’em down.”

The longer her husband is missing, the more May Rose begins to enjoy her freedom: “My plans are uncertain,” she says, and “She liked the power of these words, as though she might stay or go on a whim.”

Suzie, who runs the brothel, suffers none of the illusions May Rose has. She’s learned “men will take care of us, then we learn they’re weak and faithless. If they mean to keep us on our backs, we’re fools not to take advantage.”

Dessie, the cook, is also more world-wise than May Rose: “I suppose when you’re young, you believe your man has to be head of the house and boss of you, too,” she says. “When you’re older like me, you know that’s a lot of tripe.” May Rose fell for that. “If I’d disobeyed or spoken out, I think Jamie would have beat me,” she tells Dessie, and all these years later, after all those Virgina Slims ads and women fighting just for autonomy and simple respect, too many women still live like May Rose.

No doubt there are men who suffer and get browbeaten by women, but they tend to keep a low profile. To be fair, one woman in this novel is as rotten as any of the men. Her sons are known to sexually assault girls but she defends them, and when they bully their stepbrothers, she hands them the board to beat her own husband, their stepfather, for trying to intervene. @CarolErvin6 : The story takes place in the mountains of West Virginia, near where I’ve lived for about forty years. The story came alive as I studied old black and white photos of loggers, their equipment and horses, camps, trains, sawmills and towns. I’ve always been impressed by the hard work and ingenuity of people who accomplished so much without modern equipment. http://wp.me/p4DZi5-wr

The number of injustices in this novel, great and small, are too numerous to mention. It’s one of the reasons I can take only so much historical fiction. These things really happen.

Don’t even get me started on the horses. Fans of the thriller genre, you’d be surprised how many scenes of horror you’ll find in historical “women’s” fiction. Let’s just say animals suffer along with the humans and let it go at that, or I’ll be so angry, I’ll knock this novel down to four stars just for reminding me that life can be so damn cruel.

Yes, this novel is fiction, but the characters seem real, and the things Carol Ervin describes so well are not just imaginary sufferings. May Rose sums it up quite well when Mr. Townsend asks if she’s read Bram Stoker’s Dracula. Real life has enough horrors in it; who needs fictional monsters? One book like this, and I’m ready for a silly, unbelievable romance, or a paranormal full of magic, or a space opera with aliens and technological wonders in a galaxy far, far away from the cruelty and ignorance of this world.

It may be a while before I’m up to reading the two sequels to this story. Real life is just too brutal. I’m happy to have grown up in more enlightened times (even if too many women still live under the thumbs of men), and I’m grateful to the women who fought to make the Virginia Slims ad ring true: “You’ve come a long way, baby!” – but we still a way to go. Until then, like the old “Calgon, take me away!” commercial, I’ll be out on the porch swing with hot tea on the first warm day this year, thinking everything good I can think of about the human race. 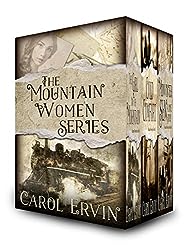 The Girl on the Mountain ranks in the Kindle Amazon Top 20 with an average 4.6 stars.

2 Responses to The Girl on the Mountain by Carol Ervin – #WomensHistoryMonth – You’ve come a long way, baby