A unsung hero has been brought to life, thanks to the painstaking research and storytelling skills of Mary Delorme. If you liked Ken Follet’s “Pillars of the Earth,” you’ll love the real-life church builder, Rahere. The cathedral in this story still exists today (almost a thousand years later) along with the hospital, aka “Bart’s,” where so many bodies and souls have been healed. 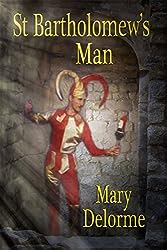 More than 900 years have passed since his time on earth, but Rahere’s legacy endures. And yet, who has heard of Rahere? An orphan raised by monks, a gifted musician summoned to sing for kings–captured, tortured and imprisoned by King Rufus in the 12th Century, a thousand years after the birth of Jesus–but his story didn’t end there. Rescued by the monks who’d raised him, Rahere recovers slowly from his physical and spiritual wounds. A vision of St. Bartholomew inspires him to build a hospital in London like the one in Rome where he was treated for fever.

Here at last is a classic story to illustrate what The Church has done right over the millennia. It seems we hear about the Inquisition, Holy Wars and atrocities committed by pedophile priests and corrupt medieval popes, and that we hear nothing of the mysterious grace and generosity of those flawed humans who become saints. Don’t get me wrong. This is not a religious book, not apologetics, not a defense of Catholicism or Christianity. It is an epic tale of flawed humanity, forgiveness, redemption, and the extraordinary goodness people are capable of. It may seem that evil rules, but stories like this remind us of how much good there is.

I plan to expand on this review when I find time, with details and quotes from the book to illustrate its merit. For now, let me say that $3 for a book with this much historical detail and human interest is a steal.

Truly remarkable fiction, with vivid and believable characters, dialogue and historical detail, and a character named Puella who will steal your heart.