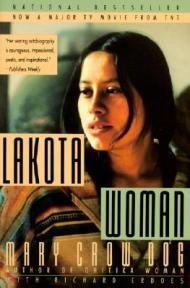 As a long revered trait, Indian women grew their hair thick and long. In order to be “tamed,” women’s hair was also subject to scrutiny, “Little girls with pretty braids, and the first thing the nuns did was chop their hair off and tie up what was left behind their ears” (Crow Dog 34).

This idea is eerily similar to Ruth Whitman’s poem Cutting The Jewish Bride’s Hair, in which the woman’s hair is a symbolism for freedom, wildness, ad independence. By having their hair cut, the women are being forced into passivity and become the product of their “masters.” Women’s sexuality was taken over and taken from them as well. Along with the physical abuse came sexual abuse. Enduring embarrassment and belittlement, Indian women, particularly those which were still in school, lived through the unjustness of the men around them. The school priests were not exempt from this type of behavior either, “All he [the priest] does is watch young women and girls with that funny smile on his face… So there was this too to contend with – sexual harassment” (Crow Dog 39). The religious supremes themselves were dishing out child rape, sexual perversions, beatings, and racism of their own doing and covering it up, “We complained to the student body. The nuns said we just had a dirty mind” (Crow Dog 40). All of these things are just other examples of dominating a young Indian girl by putting her “in her place,” which is what they were being broken down into. Hardship of this kind lasts for years. A young Indian girl’s struggle for her own rights is also a struggle to find herself.