Posted on September 8, 2016 by carolkean

Being a black FBI agent in 1919 was unheard of…until J. Edgar Hoover had no choice.

During the early days of the FBI, J. Edgar Hoover was forced to hire a black agent. Why? 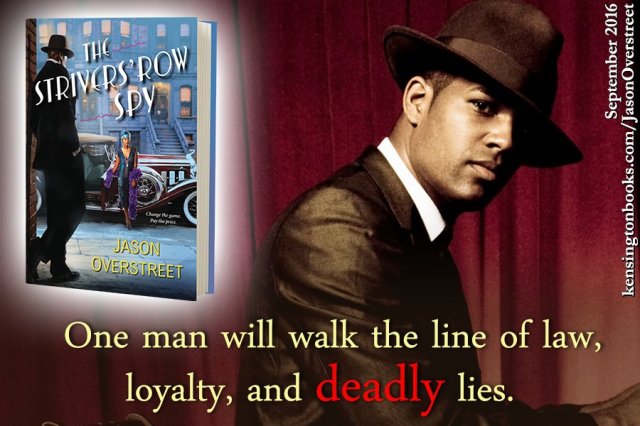 In Jason Overstreet’s debut mystery, The Striver’s Row Spy, the FBI’s first African-American agent has a secret agenda. Sidney Temple’s assignment is to move to Harlem, New York, in order to infiltrate “dangerously radical” Marcus Garvey’s inner circle and report any incriminating activity to FBI director J. Edgar Hoover. But Sidney is secretly working to thwart the FBI’s investigation while aiding black leader W.E.B. Du Bois. As Sidney and his spirited wife, Loretta, rise in Harlem Renaissance society, his mission becomes far more dangerous than he ever imagined. We asked Overstreet a few questions about his new novel. – BookPage interview by Lily McLemore

* My own book review is posted at NetGalley, goodreads, amazon, and at the end of this blog. 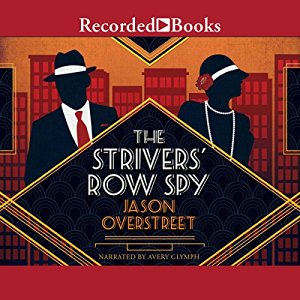 Every man wants his family to live and thrive, but sometimes he must be willing to die to ensure it.

Some things are worth dying for, and in THE STRIVERS’ ROW SPY, that “something” is freedom.

#IfICouldTurnBackTheClock I would further explain why the spy I created felt called to outsmart J. Edgar Hoover.

#SomedayIdLikeToSee this story about the 1st African American FBI agent on the Big Screen. So important historically  –@JasonOverstreet

Middlebury College, 1919. Only two black men have earned diplomas. “Momma had saved up for Lord knows how long” for Sidney Temple’s graduation gift, shiny, black patent leather shoes. For years she’s been “scrubbing other families’ homes, cooking for and raising their children,” but at age 25, with a degree in civil engineering, Sidney resolves, “I would see to it that she wouldn’t have to do that anymore.”

Much sooner than expected, Sidney is buying expensive new suits, driving a car in New York City at a time when hardly anyone could afford to own a car, throwing parties for his beloved wife Loretta and meeting her friends in the art world, and living in a beautiful home with security on Striver’s Row in Harlem.

“Harlem was quickly becoming the epicenter for colored politics–perhaps throughout the world,” Sidney narrates. Strivers’ Row was an aristocratic area in West Harlem, attracting well-paid professionals, aka strivers. “The colored folk who lived there had supposedly ‘made it.’ In fact, most were involved in the fields of law, medicine, the arts, and even architecture. I was likely the only government spy.”

Sidney’s occupation as an FBI agent for a young J. Edgar Hoover puts him in contact with some of the most fascinating people in U.S. history, from Jamaican-born poet Claude McKay to W.E.B. Du Bois and Marcus Garvey, “the fiery little man” who tried to start a Black Star Line to Africa to remove America’s colored people, descendants of slavery, to a new country in Africa where they’d be free of white dominance. That sounds like a plan the Ku Klux Klan would support, and once the FBI set out to take down Garvey, he did indeed stir up even more controversy by meeting with KKK leaders.

Sidney’s job is to take advantage of his skin color and get close to Garvey, offering his civil engineering skills while secretly reporting to Hoover. Little does Hoover know that Sidney is a great admirer of W.E.B. Du Bois, and that whenever Du Bois is targeted, Sidney writes anonymous letters to tip him off.

His secret life comes with dangers, of course, one of them being what his wife might do if she learned the real reason her husband won’t talk about his job or allow a phone inside their home. Other threats, like attempted assaults from armed men, are easier for Sidney to ward off. Sidney’s aversion to murder is one of many good qualities he manifests. He’s the most devoted, supportive and loving husband, but his career may put his wife in jeopardy.

Tension, conflict, and hard choices confront him at every turn. Sidney faces an order to assassinate someone. Does he end up killing anyone, even in self defense? The violence that comes with his line of work is bound to change him. How does an honest man keep up so many pretenses, and what happens if an adversary blows his cover?

The prose is packed full of historical incidents, names, and descriptions. Fans of the thriller genre might feel the pace isn’t fast enough, but fans of historical fiction could hardly ask for more. The climax is as tense and brutal as any thriller reader could wish.

The ending is a lovely but bittersweet surprise. The future Sidney envisioned for himself and his family in America is ripped away from him, but for the rest of America, things are looking up. No more talk of shipping all the Blacks back to Africa, united as one nation under Marcus “the Emperor” Garvey. The NAACP under Du Bois is making strides, no thanks to the FBI, but thanks to people like Sidney, who would sacrifice so much for the good of all his people.

I learned so much from this novel that none of my history teachers ever mentioned. We’ve all heard of W.E.B. Du Bois but how many of know about Marcus Garvey? Overstreet’s novel inspired me to spend hours online, learning more. I’ve added several nonfiction titles to my Kindle. One author says if Garvey had accomplished his dream of getting the African diaspora to leave the United States and Europe, uniting them in their own nation in Liberia, Garvey would have been as despotic as Idi Amin. I still haven’t read enough to find out how crazy or dangerous Garvey was, but his grandson recently asked President Obama to grant a posthumous pardon to clear Garvey’s name of mail-fraud. Was Garvey framed and unjustly imprisoned? His red-green-black flag has been brought back. Watch for it in news photos of Black Lives Matter events.

How many Americans know the fascinating history of a little nation called Liberia? I can only hope Jason Overstreet will make it the focus of a future novel. If he doesn’t, I might have to drag memories out of my son-in-law, who fled Monrovia during the Charles Taylor takeover, spent three years in a refugee camp in Ghana, found his way to America, and now has a degree in engineering, a good job, a home, and a family–in America–not Liberia. Why was there no exodus from the United States to young nation in Africa that promised economic opportunities, abundant natural resources, and freedom from white majority rule? History teachers, start with a novel like “The Strivers Row,” and set your students on fire with the desire to learn more.

This review doesn’t even begin to cover the political climate, race relations, segregation, and the sheer excitement of 1920s Harlem. I absolutely love all the references to jazz (my son Miles is a jazz bassist in Chicago), the Cotton Club, and the aspiring musician Peavine, a minor character who plays a major role in one of Sidney’s most daring and dangerous plots.

My Kindle is packed with lines I highlighted, but for a book review, there’s room only to say, “Trust me. You will love this.”

Note: Thanks to NetGalley for an ARC of this novel.

P.S. Jason Overstreet’s debut novel “The Strivers’ Row Spy” has inspired me to do a lot more research on real-life characters who come to life in historical fiction. Rare is the book that opens so many doors and makes me so eager to learn more about a time and place, the movers and shakers and people who defined an era.