Letitia Carson, freed slave, doesn’t ‘put up and shut’ up in Jane Kirkpatrick’s award-winning historical-fiction novel”A Light in the Wilderness” 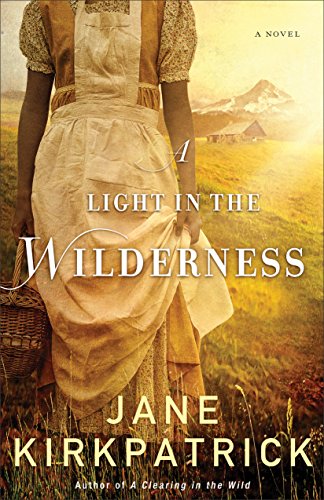 A Light in the Wilderness: A Novel by Jane Kirkpatrick brings to life a little-known woman who made history. Earning her freedom and keeping it at a time when  laws prohibited blacks from living in Oregon, Letitia Carson, a freed slave, not only continued to live in Oregon, she became the first black woman to own land in America–and there’s more, lots more. Great story, even greater because it’s a true story, for Black History Month.

SHE COULD BE A VICTIM, or she could fight for the rights only white men enjoyed under 19th Century law. Letitia Carson, a freed slave, decided not to “put up and shut up.”

Her story is all the more remarkable because it really happened. The list of nonfiction books and journals that assisted Kirkpatrick’s understanding of Letitia fill up several pages. A common theme is the Struggle for Civil Rights. There’s Miscegenation Law and the Making of Race in America; From Slavery to Segregation; “Breaking Chains: Slavery on Trial in the Oregon Territory;” “The Brazen Overlanders of 1845;” and more. One of the most poignant titles is “Help Me to Find My People: The African American Search for Family Lost in Slavery.”

“History is the spine of my stories, with characters providing the flesh and blood of life”, Jane Kirkpatrick tells an interviewer in an Afterword to “A Light in the Wilderness.”

Facebook has a “Friends of Letitia Carson” page. It’s full of information that confirms what Kirkpatrick writes about in the novel. E.g. “Here is the latest article about Letitia Carson vs. Greenberry Smith, in 1852-1856. It is being published by the Oregon State Bar Association in their official Journal, the Bulletin. Circulation is 19,000, including all 17,000 lawyers, judges, legal clerks, law professors and other members of the Oregon State Bar:” http://www.orww.org/…/Letitia_C…/Library/Zybach_20161001.pdf

Kirkpatrick says she was taken aback by a reporter who asked “what business did I have writing of Indians when I wasn’t one,” but she didn’t set out to write about an Indian woman. She wrote a story of a Marie Dorion, a strong womanwho happened to be an Indian. “That’s how I approached Letitia’s story, about a strong woman who also happened to be African American,” she adds.

“Ordinary” women like Letitia often show extraordinary courage and strength, not just in the challenges of homesteading in the 1800s American West, but in all aspects of life.

She became the first African American woman to own land in the United States. Her place in history is not well known to most Americans, but historical fiction is a great way to change that. A carefully researched novel like this one brings the past to life and lets us travel another time and place.

“History is the spine of my stories,” Jane Kirkpatrick tells an interviewer in an Afterword to the novel, “with characters providing the flesh and blood of life.”

Where I as a writer would say “Two men stood arguing in front of the Platte County courthouse,” Kirkpatrick adds concrete details, as if she’d time-traveled the scene: “Men’s voice sliced the air like whips of a field marse, sharp and stinging, The air was heavy as a wet, wool quilt, yet dust billowed around the two men as it did when bulls scraped the earth.” Not only is her prose vivid and illuminating, it’s poetic.

Opinion goes against the man named Davey Carson, but Letitia believes he’s innocent of the charges against him, even when others brush past him, “leaving the Irishman like a shriveled pickle in the bottom of the barrel, no one wanting to touch it.”

Letitia knows the feeling. She knows the rules and shows her papers when asked, “only to endure the sneers and snarls of ‘free black’ as though the word meant stink or worse, a catching kind of poison spread by being present near her breath.”

Letitia counts her blessings, though, not just the offenses against her. “She’d earned money helping birth babies, enough to buy a cow.” She was on her way to Oregon, “where people wanted to join the States as free. She’d be free there too, and without slavery and its uncertainty hovering like a cloud of fevered mosquitoes.” She could try her hand living alone, or “if she married and had children, they’d be born free and no one could ever sell them away from her. What property she had would be hers to keep. Like the cow she owned.”

Her cow is usurped by the disgruntled wife who wants to keep Letitia with her on the Oregon Trail as cheap labor, but Letitia stands up for herself, keeps her milk cow, and even dares to tell her former masters that she would find her own way to Oregon rather than “earn her keep” by serving them along the trail.

A kind Irish immigrant, none other than the unjustly maligned Davey Carson, gives Letitia a housekeeping job. He doesn’t take advantage of her in any way. He wants to offer her more, but it’s illegal for whites to marry blacks. Letitia agrees to a union that is not legally recognized, but loyalty and devotion transcend the law.

Just when things are going well, with a newborn baby boy in Oregon, new troubles arise. “Herd’s growing. Garden sendin’ up shoots. We selling butter and cheese and beef this year… Why you want to leave that” in search of gold?” Letitia asks Davey, who wants to join the hoards of men heading to Sutter’s. She’s also “worried about that exclusion law” and what’ll happen to her and the children and the farm if “anyone of color has to leave Oregon,” but Davey doesn’t think anyone will enforce “the crazy law” even if voters do make Oregon a slave state when it joins the Union.

Not only does the exclusion law pass, but so does “a law forbidding persons of color to testify against a white man. If a white neighbor stole something from a colored man, the courts were no recourse.”

Despite all Letitia’s concerns and pleas, Davey rides off in search of gold. Sure enough, two horsemen show up, ordering the “wench” and her “mulatto brats” to leave. You’ll have to read the book (or wade through various history journals) to see if Letitia stays or goes. I’ll leave you with this:

“She was powerless to change the law, but she could change how she defended against it, what stories she told herself, a slave of anger or a free woman. Her children required it. She didn’t know then how much.”

photo borrowed from Friends of Letitia Carson  Facebook page
.
“Now more than ever,” to use a phrase I’ve come to hate, this novel deserves more attention.

Thanks to NetGalley for the ARC, which I’ve had since 2014 but didn’t finish until now due to the eye strain of formatting issues. A clean, readable manuscript gets my attention but broken text and anything that makes me work harder will lose me.