“Framing the Black Panthers: The Spectacular Rise of a Black Power Icon” by Jane Rhodes

Given how much the media has defined for the masses who and what the Black Panthers are, it’s helpful to find a book that specifically addresses the images manufactured by the media, with a comparison/contrast to the facts, which are hard to find. Unless people kept journals and letters, recorded with video cameras, taped speeches, and donated archival material to libraries, and unless historians and hagiographers collect, sift, and present the facts, how do we ever know who said what, who “started it,” who “had it coming,” and what anyone’s intentions are?

I was happy to see Marcus Garvey mentioned in this book. Since reading Jason Overstreet’s “The Strivers Row Spy” last September (via NetGalley), I’ve been insatiably curious about the charismatic and controversial Garvey.

Overstreet’s novel paints a rather dim view of Jamaica’s national hero, an impassioned leader whose followers called him “Your majesty.” In 1920s Harlem, in the United States at any time, that sort of thing sounds off putting, if not alarming. Did Garvey really have such an exalted view of himself and his role in leading U.S.-born descendants of slavery to a new country in Africa? The red, black, and green stripes of Garvey’s flag wave today at Black Lives Matter protests–and in Boston, and other cities, some have demanded that the flag not be flown, because it incites violence. Garvey’s flag (I’ve devoted another blog post to that story) inciting violence? *sigh*

You see what I mean about what people are told, what they believe, what conclusions they leap to.

In 1915 W.E.B. DuBois called for a “negro brotherhood” across the globe, to fight Western imperialism and empower the darker races. Two years later, Marcus Garvey created UNIA (Universal Negro Improvement Association), and his speeches drew crowds of thousands in Harlem. Both men protested injustice and discrimination, both inspired others to work toward a unified front against white supremacy, yet both men hated each other. Garvey extolled black self-sufficiency and repatriation back to Africa.

A great many blacks, however, having been born in America, wanted to stay here. They wanted to make things better here, not start all over in a new place, where the effects of British colonialism were firmly established. In the 1970s, a leader of the Panthers’ Kansas City chapter fled to Africa and joined the Cleavers in exile in Algiers. Rhodes writes that “their experiences embody the longings of many African Americans– to be surrounded and embraced by a nation of black people, to become part of an ancestral community, and to leave behind the hostile gaze of the west.”

However many may wish that, the idea does not seem to be spreading. Even when African Americans migrated north in the early 1900s, the southern economy was said to be undermined, and northern stability threatened, because it’s in the South that “the Negro is most at home, where he is best understood, and reality best liked.” (Ouch.)

Does the hindsight of the 21st Century suggest that repatriation in Africa would have empowered blacks more than integration has in the United States? I’m still looking for the answer to that. The subject is much too big and too complex for such sweeping generalizations or conclusions.

“The black man has been a serf, a tool, a slave and a peon for all the world and has been regarded as less than a man. That day has ceased,” Garvey told a crowd in Madison Square Garden in 1920. He called for backs to reclaim Africa for their own. In creating the Black Star Line, buying a fleet of ships to bring the diaspora back together in the motherland, Garvey attracted the attention of J. Edgar Hoover, and the FBI got him jailed on a sketchy charge of mail fraud. Newspaper editorials lampooned Garvey for dressing like a medieval king and for failing to grasp that “the whole of Africa never did belong to negroes.”

This led me to read a book written in 1890s on the history of Liberia (the nation Garvey targeted), and even then, after Jefferson and Monroe launched the idea of sending free blacks to Africa, the natives there were not accommodating. This is the measure of good literature and good nonfiction: the amount of research it inspires me to take on, trying to learn more about a topic in a book.

Dismissive commentary by the press “was part of the overall discourse of African Americans,” writes Jane Rhodes in “Framing the Black Panthers.” Newspapers disseminated the prevailing ideologies on race. “Black Americans existed only in narrow and closely definable frames– as a threat to the social order and political stability, as violent and impulsive, or as politically naive and immature. Articles about the efforts of established groups such as the NAACP were invariably brief and distanced….Thus, the media…. are central purveyors of the framing of black America.”

“The media.” Rhodes asserts, “had a stake both in maintaining the status quo and in promoting social transformation.” We can figure out what the media told the world about the Black Panthers, but even public surveys don’t reveal how audiences really interpret the media’s message. The FBI “put considerable energy into feeding misinformation to the media,’ Rhodes says.

Rhodes provides an extensive bibliography and links to source material. I especially like her chapter on critical memory vs the “nostalgic impulse,” with quotes from Houston Baker, e.g., while nostalgia “writes the revolution as a well-passed aberration, critical memory judges severely, censures righteously, renders hard ethical evaluations of the past.”

What images do we associate with this #BlackPower movement? A scene in the movie “Forrest Gump” shows us the iconic  guns, berets, upraised fists, and phrases such as “pig” for cops and “power to the people.” Giving credit where it is due, blame where it is owed, would be a daunting task for anyone, but Rhodes tackles it. Her conclusion, I think, is that the Panthers used the media to gain notoriety and momentum at a time when the government sought to silence them by any means possible; meanwhile, the media had their own agenda, which is to sensationalize news and sell stories. Even half a century later, news reports of violence against the Panthers and *by* the Panthers are so numerous, so varied, I have to commend Rhodes for her years of effort and research. 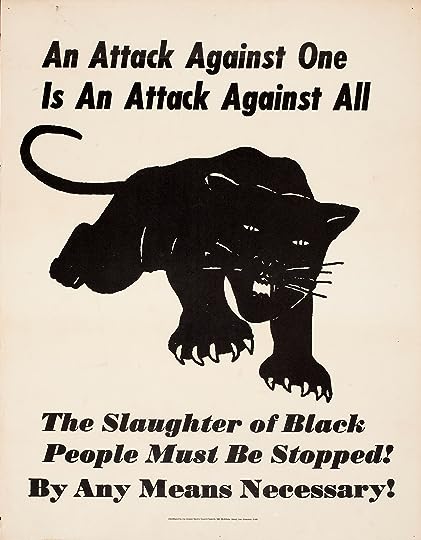 In all, this book pulls together in one place a lot of scholarly research. I’m still in a muddle about Marcus Garvey, but my own research is far less exhaustive and organized as that of Jane Rhodes. Garvey, exiled from the United States after serving his time in jail (for what many say was a bogus charge), had no connection to the Panthers, but the way he has been portrayed in the media strikes me as similar to the negative publicity heaped on the Black Panthers. Anyone who cares to enlighten me can comment on my assorted Garvey posts here at my blog. 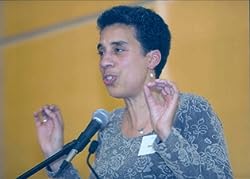 Jane Rhodes is Professor and Chair of American Studies and Dean for the Study of Race and Ethnicity at Macalester College.