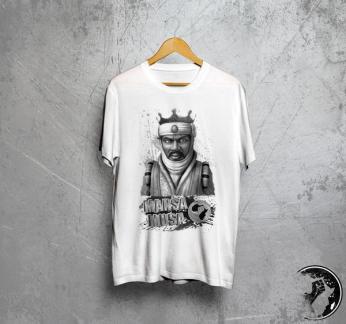 My daughter asked me this morning if Timbuktu was ever a real place. Oh, yes! I rushed to the internet, and quickly got distracted with the story of the man who annexed the ancient, legendary, and REAL city of Timbuktu:

African King Musa Keita I –  the richest person of all time — “richer than anyone could describe” — ruled all (or parts) of modern day Mauritania, Senegal, Gambia, Guinea, Burkina Faso, Mali, Niger, Nigeria, and Chad. And he was a GOOD king. He conquered 24 cities, each with surrounding districts containing villages and estates, but he traveled far and wide, giving away so much gold, the market value of gold temporarily declined.

Accompanied by thousands of richly dressed servants and supporters Musa made generous donations to the poor and to charitable organizations as well as the rulers of the lands his entourage crossed. On his stop in Cairo, Egypt, the Emperor gave out so much gold that he generated a brief decline in its value. Cairo’s gold market recovered over a decade later.

So why do the evil conquerors live on in history, but Asoka (aka Ashoka), the first Buddhist king, and good King Musa Keita I, are unheard of by most people? Good deeds are worthy of comic books, action adventure movies, and thrillers. Just toss in an evil villain, and bring to life, in graphic novels and illustrated children’s books and Disney movies, the GOOD GUYS.

Musa Keita I was crowned in 1312 and given the name Mansa, meaning king.

Mansa Musa was in charge of a lot of land. He annexed the city of Timbuktu and reestablished power over Gao. His empire stretched about 2,000 miles.

His procession reportedly included 60,000 men, including 12,000 slaves who each carried four pounds of gold bars and heralds dressed in silks who bore gold staffs, organized horses, and handled bags. Musa provided all necessities for the procession, feeding the entire company of men and animals. Those animals included 80 camels which each carried between 50 and 300 pounds of gold dust. Musa gave the gold to the poor he met along his route. Musa not only gave to the cities he passed on the way to Mecca, including Cairo and Medina, but also traded gold for souvenirs. It was reported that he built a mosque each and every Friday.

But Musa’s generous actions inadvertently devastated the economy of the regions through which he passed. In the cities of Cairo, Medina, and Mecca, the sudden influx of gold devalued the metal for the next decade. Prices on goods and wares greatly inflated. To rectify the gold market, on his way back from Mecca, Musa borrowed all the gold he could carry from money-lenders in Cairo, at high interest. This is the only time recorded in history that one man directly controlled the price of gold in the Mediterranean.

After reigning for 25 years, Mansa Musa died in 1337. He was succeeded by his son, Maghan I. “The king’s rich legacy persisted for generations and to this day, there are mausoleums, libraries, and mosques that stand as a testament to this golden age of Mali’s history.

His wealth is estimated at $400 Billion.

Musa Keita I (c. 1280 — c. 1337) was the tenth Mansa, which translates as “sultan” (king) or “emperor”, of the wealthy West African Mali Empire. At the time of Musa’s rise to the throne, the Malian Empire consisted of territory formerly belonging to the Ghana Empire in present-day southern Mauritania and in Melle (Mali) and the immediate surrounding areas. Musa held many titles, including Emir of Melle, Lord of the Mines of Wangara, Conqueror of Ghanata, and at least a dozen others. It is said that Mansa Musa had conquered 24 cities, each with surrounding districts containing villages and estates, during his reign. He is known to have been enormously wealthy; reported as being inconceivably rich by contemporaries, “There’s really no way to put an accurate number on his wealth” (Davidson 2015).

… Upon his return from Mecca, Mansa Musa brought Arab scholars, government bureaucrats, and architects. Among those who returned with him was the architect Ishaq El Teudjin who introduced advanced building techniques to Mali. He designed numerous buildings for the Emperor including a new palace named Madagou, the mosque at Gao, the second largest city in Mali, and the still-standing great mosque at Timbuktu, the largest city in the empire. That mosque was named the Djinguereber. El Teudjin’s most famous design was the Emperor’s chamber at the Malian capital of Niani.

Mansa Musa’s pilgrimage boosted Islamic education in Mali by adding mosques, libraries, and universities. The awareness of Musa by other Islamic leaders brought increased commerce and scholars, poets, and artisans, making Timbuktu one of the leading cities in the Islamic world during the time when the most advanced nations from Spain to central India were Muslim. Timbuktu was clearly the center of Islamic Sub-Saharan Africa.

Musa’s pilgrimage to Mecca brought Mali to the attention of Europe. For the next two centuries Italian, German, and Spanish cartographers produced maps of the world which showed Mali and which often referenced Mansa Musa. The first of these maps appeared in Italy in 1339 with Mansa Musa’s name and likeness.

1375 Catalan Atlas, one of the most important world maps of Medieval Europe, Wikimedia Commons

Mansa Musa died in 1337 after a twenty-five year reign. He was succeeded by his son, Maghan I.

Moreover, with Israel coming under Greek, Persian and later Roman rule and dependency, renewed waves of Jewish refugees including traders and artisans began to set up more communities in Egypt, Cyrenaica, Nubia and the Punic Empire, notably in Carthage. From Carthage they began to scatter into various historically established, as well as newly emerging Jewish communities south of the Atlas mountains nearer to the modern day Mauritania, Niger, Mali, Nigeria, Senegal, Cameroon and Congo. Several Jewish nomadic groups also moved across the Sahara from Nubia and the ancient kingdom of Kush towards west Africa.

Who knew? Not I: Various East and West African ethnic nations lay verifiable claim to their Jewish ancestral heritage. Almost 300,000 “of those black Falasha Jews live in the modern State of Isreal as practising Jews. True black history.” Business Insider

My grandson, Winslow, is the son of a native of Liberia (next door to Ghana). If I believed in reincarnation, I’d swear that Winslow is a great emperor who’s come back as a 21st Century American citizen. This is Winslow at the age of one week (in tux), then one month (with his paternal grandpa), then 2 months (his maternal great-grandpa is a farmer of German descent): 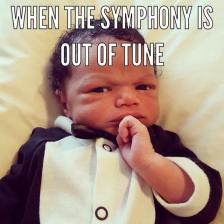 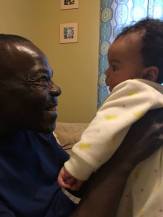 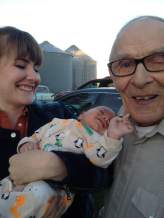 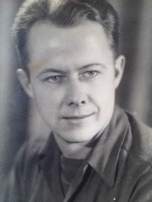