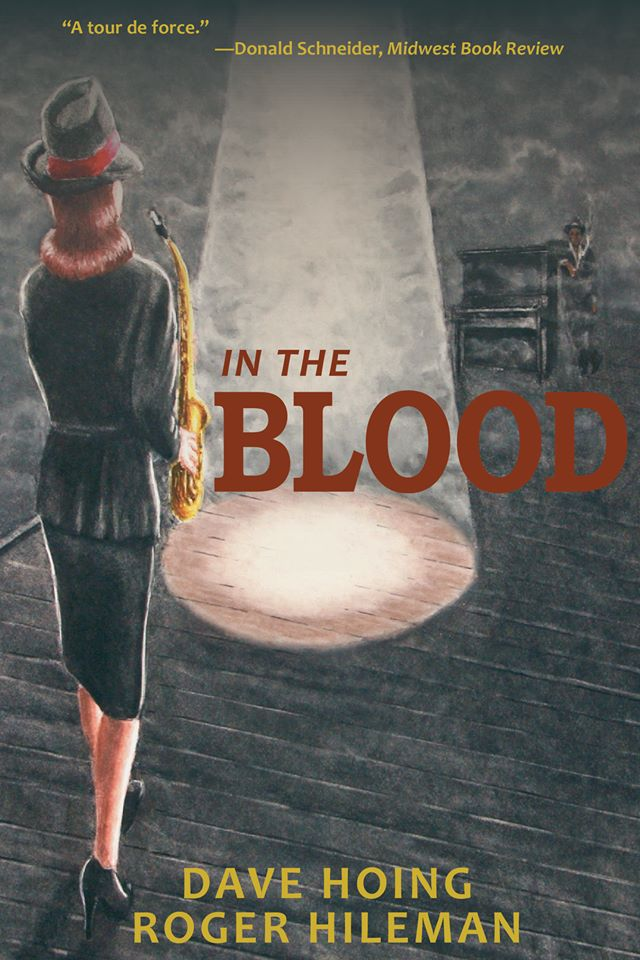 …The trouble with K.C. Brown’s dream of playing alto sax with a local jazz band is that she’s a nineteen-year-old white girl, the band members are middle-aged black men, the year is 1948, and they all live in a racially divided town in Iowa.

Here, there be magic

Even though it’s historical fiction, with all the gritty, brutal real-life truth we expect from the genre, “In the Blood” is a 20th Century fairy tale. 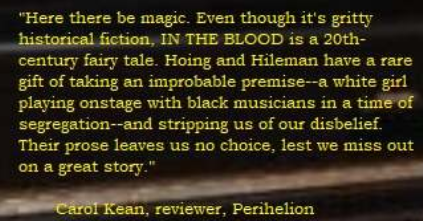 And even though K.C. Brown is the youngest sibling of two sisters and a brother who died bravely in WWII, she finds her fairy godmother, so to speak, in the most unexpected form, a lonely jazz trombonist with mangled hands.

Twisted people, twisted history. Dave Hoing has a rare gift of making me wince and cringe and shield my eyes, but it’s too late, I’ve been pulled into the story, and this fictional world is so real, I can no more leave the story than I could end my own life.

Character development is spot-on, even in the most minor players.

I guarantee it. There is so much to say about every single minor character, especially members of this jazz band, I think I’ll just let the reader meet them all firsthand.

KC’s boyfriend, her boss at the grocery store, her groping co-worker, her sisters with their 1950s attitudes, her nosy landlady, the musicians with drug habits that keep them from performing, Freddy’s wife, a cat named Washington–even the cat his a distinct and memorable personality!–and the locals who resurface from previous Hoing and Hileman novels, all are so real, it’s hard to believe this is only fiction.

The ending is sad in so many ways, yet uplifting and gratifying.

horrifying events, usually taken straight from real life, make all their stories unforgettable.
Just try to forget what happened to Freddy’s fingers. And why he was unable to get proper medical care.
Or the workers who went on strike at the meat packing plant, and the shooting that happened in real life, though names were changed in the novel.

when the novel opens in the same town we read about in “Hammon Falls,” with its haunting tale of a WWI soldier taken–you guessed it–straight from real life. Hoing and Hileman fictionalize the names of the towns, but local business and landmarks are recognizable to anyone who’s been there. Lost loved ones live on in fiction.

KC’s brother Kenny is forever a part of her,

gone but not forgotten

in that way so many of us know all too well. Whatever she does, wherever she goes, she carries part of her brother with her. Hard-hitting prose, lean, economical, lyrical, captures this in scene after scene. E.g.

Her brother didn’t miss the war. Kenny didn’t wait to be drafted, enlisting in ’41. He was brave. He was the best. He volunteered for every dangerous mission. He died. He never got to have a wife, or a house, or children, or a dog. Worse, all of his music died with him­–all, except what was left inside K.C.

KC may seem like an anachronism, the only free-thinking member of her family, resisting the limited expectations of a girl in a small Iowa town. Women, along with Blacks, were held back in a court of public opinion that punished those who stepped outside boundaries that society held dear. It was an era where racism was acceptable and allowing blacks to rent hotel rooms was not. Naturally, the white folk took pride in being tolerant of blacks living and working alongside them, but Hoing yanks the curtain back on their ignorance with snarky inner monologues that ring true, e.g.:

The white folks here didn’t like blacks any more than in Biloxi or Selma, but most were too stupid even to be good racists.

… one of those progressive white families that was on the side of the Negro. Made no difference what they said they believed: push come to shove, none of them wanted one of their own living black. Being fair-minded was fine, long as it involved someone else’s kid.

KC reminds me of my sister, who in 1975 insisted on thinking for herself (gasp! Everyone else in town hadn’t left the 1950s yet), and who would have done all the things KC does (on a guitar, not sax, and vocals, and fine, as a rock star, not a jazz musician, but let’s just say KC really captured so many things I’ve seen in real life. And as a result of her strong-minded, independent thinking, KC thinks of herself as a nice person but she doesn’t have many (any) friends.

** I will add more when the book is released!**

Thank you to Jessica Hughes for her mention of this book (and this review) at Islander Highlights – Week 9!