Lessons from Lucy: The Simple Joys of an Old, Happy Dog by Dave Barry 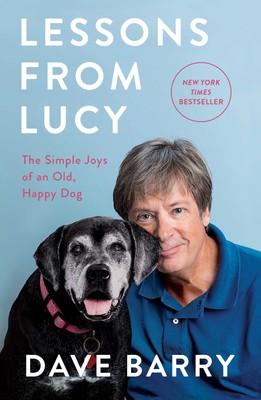 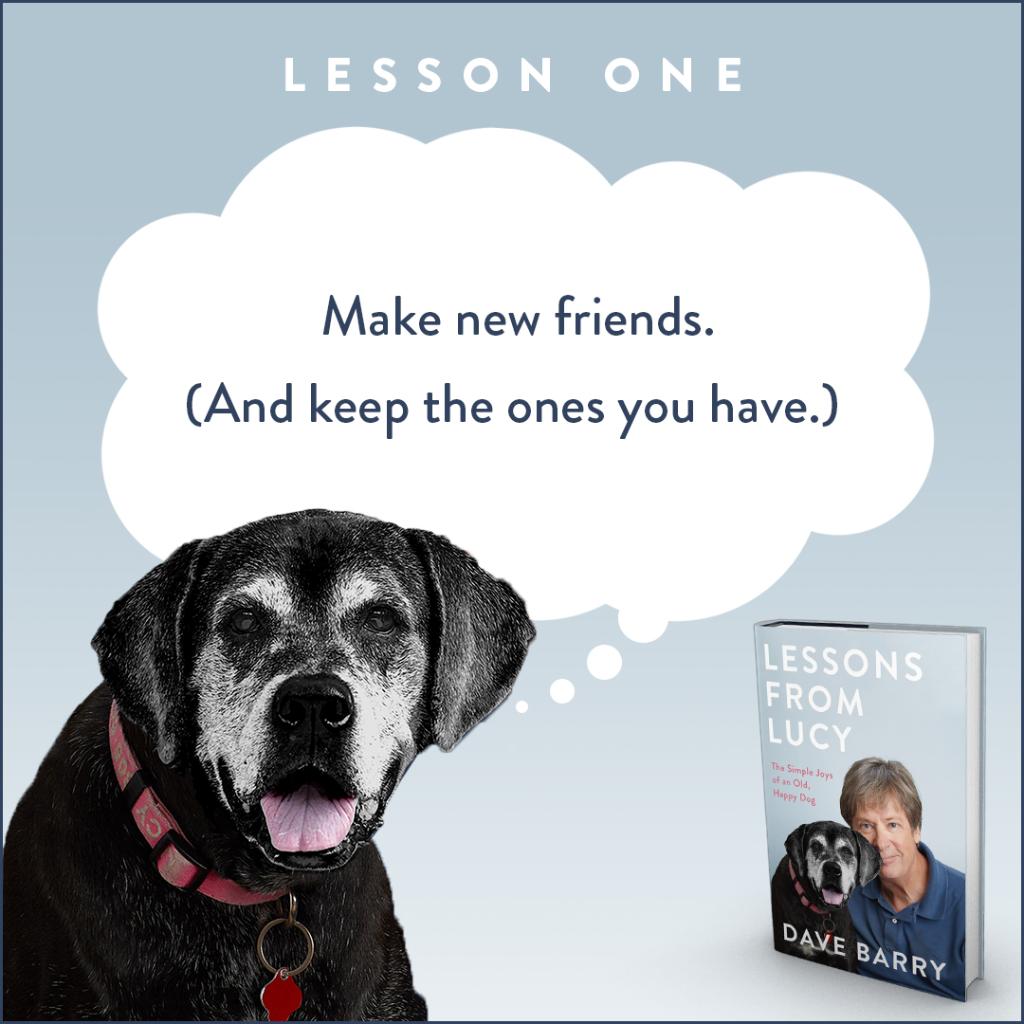 He taps into the wry and intelligent sense of humor that launched his career, and we get to enjoy Dave Barry’s “Lessons from Lucy: The Simple Joys of an Old, Happy Dog.”

Keep this book on hand in case someone near you needs a good laugh.

Dave Barry is seventy (I can say that now that shock has worn off), but this is not a memoir, he assures us.  (“Memoir” is a more off-putting word for me than “succubus.”) Also, it really is not a self-help book, but it could be if you let it.

Barry simply observed his happy, carefree dog Lucy, wondered why he isn’t more like her, then…voila!…came up with Seven Lessons to convey in this book.

Ok, there was a lot more to it than a “Voila,” as all writers know, but it reads like magic.

If you read my blogs, Tweets, Steemit posts or Facebook rants, you know I’ve lost patience with Indie Authors who ask for my time reading/reviewing their books, but they don’t take time to upvote any of my reviews, because I need to get the word out: my word carries more weight if readers do the annoying “upvote” and “Like” thing. Otherwise, my ranking as a reviewer is a numbers game, and #ListenToCarol and #BuyTheBook won’t happen if I don’t have NUMBERS to raise my reputation. Oh, I hate asking people to do the LIKE thing. Hate it! But this is a competitive world, and my kinder and gentler ways are keeping me in the lower ranks.

Dave Barry has been my god (of humor, of writing, of dry wit and total guy-dom) for 30+ years,

Headlines with numbered lists attract readers, as do “Secrets” – the secret to happiness, to success, to the nice neighbor man with 30 skeletons under his basement. So who could pass up Dog Reveals Seven Secrets to Happiness In Our Old Age?  You know it will be comical, because, Dave Barry. What you don’t know: Dave’s secrets! 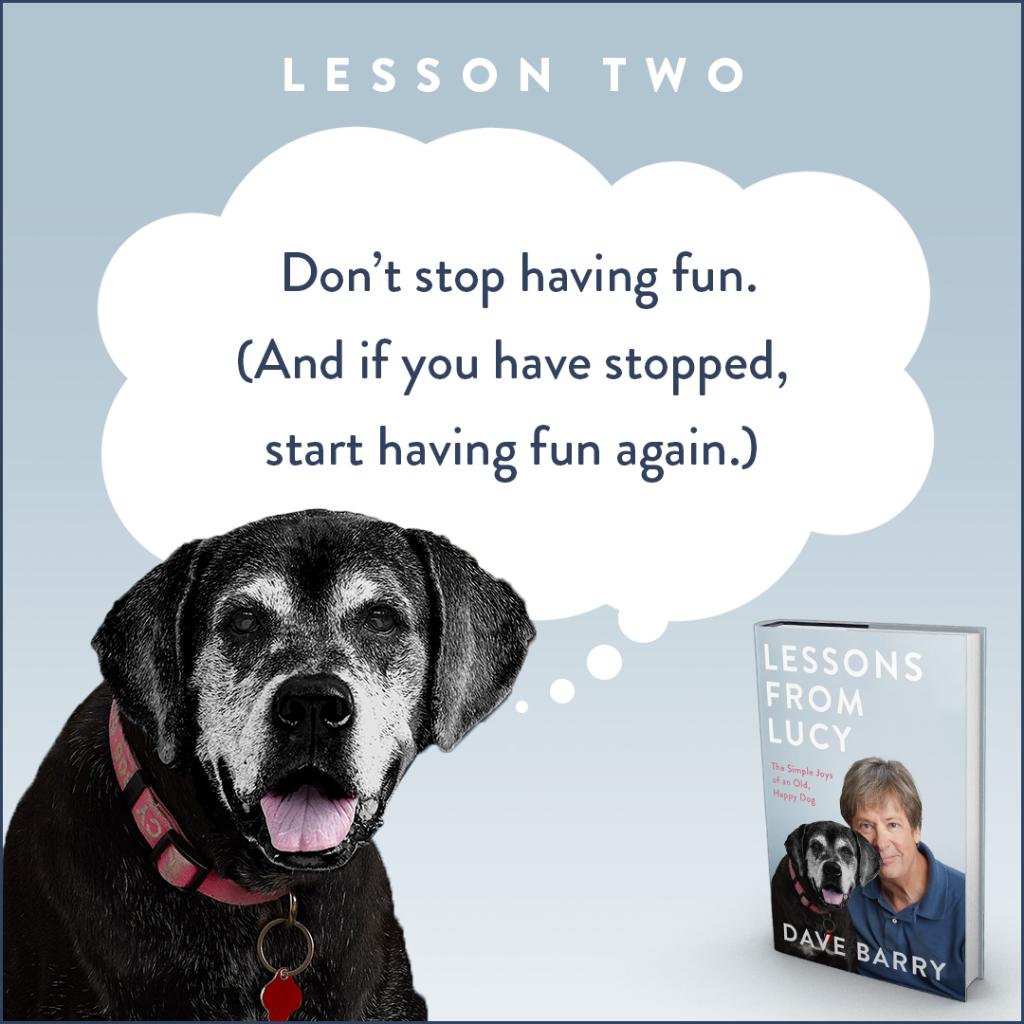 DAVE HAS SECRETS!
Like, this Pulitzer-winning public figure who makes everyone laugh is…. shy? For reals?

I’m not saying any more on that, because you need to buy this book yourself. Uncover the secrets one by one, at your leisure.

The whole book is full of wry wit like this:

Oh so many good lines!

In “Lesson One: Make New Friends,” we see how a dog named Lucy can bound over to any stranger, sniff, and fall in love, while Dave “instantly hates” strangers. (We all do, really, but most of us don’t allow our conscious selves in on THAT secret.) Barry’s reasons for his varying levels of antipathy toward strangers are hilarious and familiar to us all. You will nod knowingly. Oh yes. You will.

Another secret: he doesn’t “hate” in the usual sense of the verb.

Dave Barry delivers the humor we know and love, but he also sneaks in some sly wisdom and something like warm fuzzies, which could undermine everything he ever wrote in Dave Barry’s Complete Guide to Guys, which still makes me laugh out loud years after I first read it. I read it out loud to anyone who’ll listen, and no matter how many years go by, no matter that none of it is new material to me, I laugh harder than the Barry virgins (those who have not yet had the pleasure of discovering this humorist. The Millennials tend not to laugh AT ALL when I read to them from my last-century Barry books.) Furthermore… 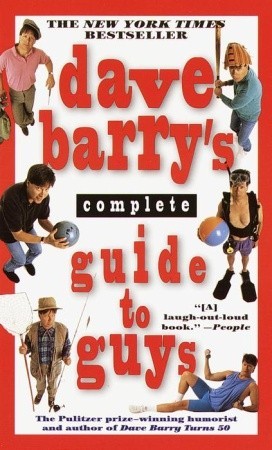 The guy mind does not believe in medical care. Guys will generally not seek medical treatment, for themselves or for others, except in certain clear-cut situations, such as decapitation. And even then guys are not going to be 100 percent certain. “Let’s put his head back on with duct tape and see if he can play a couple more innings,” is the prevailing guy attitude.”

… We are talking about THIS book. And nothing about Lessons from Lucy, not even the threat of “self-help” and that scary word “lessons,” will make you wish you’d never heard of #LessonsFromLucy. I’ve only bought one of Dave Barry’s books (I know, I should own every single one of them), and I’m a huge fan of dogs as well as cynical witty guys. And I’m a cynical gal, so I braced myself in case the 70-year-old Barry is as washed up as old rock stars like, uh, let’s see… not Robert Plant, not Jagger, but…. well, I can’t even think of rock legends who aren’t cool anymore.

I have just one complaint about this book. I found the Rock Bottom Remainders on you-tube, and this band of novelists (Stephen King, for one, and Dave Barry himself) are

not even remotely as terrible as Barry tells us they are. E.g.

(Coincidentally, I have been smitten with Roy Blount Jr for, approximately, forever.)

I love Barry’s self-effacing humor. But don’t let him fool you. These authors-turned-musicians in Rock Bottom may not have made the Top 40 or even #100 on the pop charts, but they’re not only waaaay better than Barry lets on, they’re good.

Maybe that’s the way to promote: get everyone thinking “This sounds so awful, I’ve got to see for myself,” than bowl them over with actual talent.

Dave Barry is still cool. He’s still hilarious. There is hope for this world! He says he’s a curmudgeon, annoyed by texting teenagers and Facebook, but he is firmly fixed forever in my mind as that college guy who’d meet his buddies on a rooftop and throw down an old TV to shatter on the sidewalk below–and the moral of the story is that women hearing it will say “Why?” while men hear it and say “Cool!”

I tried to find that column before writing this review, but it was in some newspaper when I was young and single, and now I’m a mother of three, a grandmother of two, and I’m getting phone calls from purveyors of those “Help! I’ve fallen and I can’t get up!” gadgets. And I got distracted by a dozen new Talking Dogs and sad-cat videos before finding my way back to the writing of a book review about this author who wrote a hilarious column about men’s idea of fun versus women’s. Hence, the TV anecdote that so perfectly distills and displays the epitome of guy humor.

The chapter on old rotary telephones and children roaring “It’s Long Distance!” nails everything about that pre-Twitter era. And buying too much stuff, and being held hostage by possessions we don’t know how to get rid of. And how we use our time. “I waste WAY too much time on the internet,” he writes, “and a whole bunch of that time consists of my reading something and thinking: *What a moron.* I’m seventy years old; I don’t have that much time left. *Why am I wasting it on morons?*”

For more than two decades, Barry wrote a syndicated humor column for the Miami Herald. He’s written more than 30 books, most of them humorous non-fiction works.

I’ve always wondered if his fiction would be as funny as his columns. (I’ve met novelists who are hilarious on Twitter or in emails but in prose, dry as White Sands.)

A new book by Dave Barry (with dogs!) is just the ticket. I’d have given copies away for Father’s Day to all the friends my age who’ve become grandparents, but the release date is…. 23 October 2018. Dang. Some of them may be dead by then. My peers are dwindling, not because I’m a peerless writer but because too many people my age are dying of something, and I need all the humor books and cat videos I can find to get going after reading Obits each morning.

There is a downside to being first to read an ARC: the long, long wait until you can buy copies for your friends!
Thank you to Simon & Schuster and NetGalley for an advance copy of this book in exchange for my honest review. I will write a longer review with excerpts showing how funny this book really is, but I’m in a holding pattern wondering how many people ever read my longer reviews. How many people will pre-order this book, or even download a free sample chapter, based on Carol’s word? Millions ought to, but the world is like my offspring: my words of wisdom roll like raindrops off a freshly waxed car. You wait. One day your car will be stalled and as you wait for a tow truck you’ll WISH you had this book to amuse you! Ha! And I will say, “If only they’d listened to Carol, and bought the book, and kept a copy in their man purse or their car or their sled dog’s packs.”

My copy is in my Kindle, which would freeze if I ever make it to an Iditarod, but just because I’m a grandma now doesn’t mean I’m getting sidetracked again about why this book matters and deserves to top the charts that The Rock Bottom Remainders aren’t even trying for, because they’re just having fun, and that’s the whole point.

HAVE FUN!! Your dog would. So should we all!

2 Responses to Lessons from Lucy: The Simple Joys of an Old, Happy Dog by Dave Barry